While the terms "accuracy" and "precision" sound as if they should be synonymous, they are not. Accuracy measures the ability to hit a specified target consistently. Precision measures the tightness of the shots. The diagram shows examples of each.

Precise: these shots are considered precise because they are clustered close together. They are not accurate due to their distance from the bullseye.

Accurate and Precise: these shots are considered accurate and precise because they are in a tight group close to the bullseye.

Neither: these shots are not considered to be accurate or precise because they are not close to the bullseye and are not in a tight group. 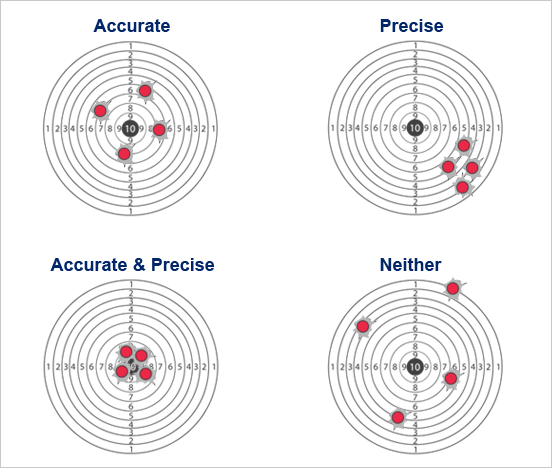 One of the most common misconceptions about "AR" rifles is that AR stands for automatic or assault rifles. IT DOES NOT!

AR stands for ArmaLite, the company that designed the firearm in the mid-1950s. AR-15 style rifles are semi-automatic, lightweight firearms. Semi-automatic means they fire a round each time the trigger is pulled (as compared to a fully automatic rifle where several rounds are fired with each trigger pull). The AR-15 was designed to be quickly reloaded and can be customized with accessories such as lasers, sights, scopes, flashlights, etc.

According the NSSF (National Shooting Sports Foundation) "modern sporting rifle" or "MSR" is a term that was coined to describe today's popular semi-automatic rifle designs (including the AR-15s). Modern Sporting Rifles are not a particular make or model; rather, the term describes rifles such as AR-15s and other hunting rifles. Because the term "AR" is so often misused and has become politicized, the term modern sporting rifle is gaining popularity.

An automatic rifle is also known as a machinegun. These rifles are used by the military and are generally not available for civilian purchase. Under federal law, a machinegun is defined as, among other things, a firearm that shoots, automatically, more than one shot without manual reloading by a single pull of the trigger. That is, you hold the trigger down and the gun keeps firing until it runs out of ammunition.

Semi-automatic rifles are available for civilians and are not capable of continuous firing. While a semi-automatic rifle automatically chambers the next round, you must manually pull the trigger each time to fire a shot.

A bullet is simply part of the ammunition cartridge that, once the gun is fired, is expelled out of the barrel.

Cartridges are made up of a case, primer, propellant and bullets.

People frequently confuse the terms "clip" and "magazine." Clips are used to hold ammunition in the correct place so it is easier to load the ammunition into the magazine. Clips do not remain in the firearm after you have loaded the magazine.

Magazines serve to store and feed the ammunition into a firearm's chamber. Magazines can be either detachable or internal.

Detachable magazines are taken out of a firearm, loaded with ammunition, and inserted back into the firearm when ready to fire. An internal magazine is exactly as it sounds, internal within the firearm and is not removed to reload.

The two most common misconceptions with these terms is that they are synonymous or that an extractor not only extracts spent shells but also ejects them. Extractors hook onto fired shell casings and remove them from the chamber. Ejectors do exactly as they sound, they are the mechanisms which eject spent shells.

Some people use the word "grip" and "handle" interchangeably.

The correct term for the part of the firearm which you hold in your hand is grip.

Many people think that the term "shell" only refers to shotgun ammunition. In reality, the term shell refers to handgun, shotgun, or rifle cartridges or cartridge cases.